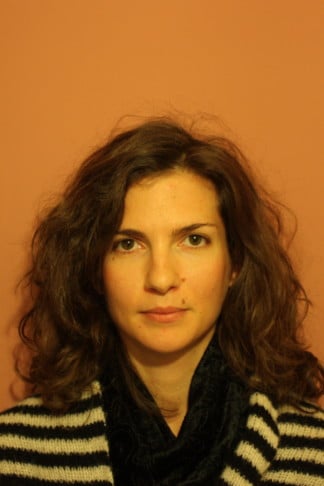 Since 2020, she has been leading the module Writing the Body that explores interdisciplinary and embodied approaches to writing for the MA Creative Practice at Trinity Laban Conservatoire of Music and Dance where she also supervises MA and MFA projects. This year, she will teach a 3-week intensive to MA Choreography students as well.

Vanio has worked extensively at Rose Bruford College since 2011 as the principal movement tutor in the BA European Theatre Arts and has contributed to other modules and supervised practical and written dissertations. She was recently appointed as Module Year Coordinator in the same course. She has convened the Research Methodologies unit at the MA Ensemble Theatre (2014 – 2018) and has coordinated the IRP projects for the MA Actor Performer Training (2021, 2022).

Vanio has taught physical and ensemble theatre at Goldsmiths (2009-2022) and has worked as a movement and dance tutor in various other Higher Education Institutions including LAMDA and Middlesex University.

After training as an actor and a dancer in Greece and the UK, she embarked on her Practice as research (PhD, Goldsmiths, 2013, funded by Greek State Institution of scholarships) into the Post-Grotowskian theatre tradition and Contact Improvisation as part of which she worked with the award-winning company Song of the Goat Theatre (Poland). She has studied internationally with various inspirational theatre and dance practitioners including Farm in the Cave (Czech Republic), Studio Matejka (Poland), Meg Stuart (UK), Nancy Stark Smith (UK/Spain), Charlie Morrissey (UK/Malta), Kirstie Simson (UK), and Simonetta Alessandri (UK). In 2022, Vanio became a Fellow of Higher Education Academy.

As a performer, she has worked for an eclectic mix of artists (Theatre Lab, Athletes of the Heart Lab, Song of the Goat Theatre, Angela Woodhouse, aswespeakproject, Nesreen Nabil Hussein). She has co-created with artist and dramatherapist Tania Batzoglou the performance ritual project titled CANDID that reflects on how female friendships evolve over time. She has led intergenerational projects for women that combine yoga, movement, and writing. Vanio’s work engages with issues of vulnerability, memory and candidness fusing physicality, video, autobiography and text into poetic, surreal and immersive environments and it has been shown in Greece, UK, Italy, Poland, Germany, Egypt and Lebanon.

Education
2009-2013: Practice Based PhD: ‘Towards a practice of Attunement: An Incorporation of Elements from Song of the Goat Theatre and Contact Improvisation’ / Goldsmiths, University of London & Royal Central School of Speech and Drama