"A charismatic voice in new music" 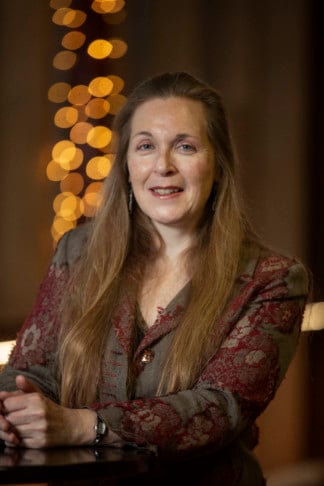 Deirdre Gribbin is an Irish composer, whose work has been described as “astonishingly accomplished” and “pure magic” and “so powerfully expressive that it communicates its meaning instantly” by Richard Morrison in The Times, for her Aldeburgh produced opera “Hey Persephone!” which won The Arts Foundation Award for Opera, and Northern Arts Outstanding Artist Award. She was appointed as External Output Assessor for the Research Excellent Framework; REF 2020-22.

‘Hearing Your Genes Evolve’ for string quartet featuring in a Filmtank Production, ‘The Dark Gene’ was nominated for a Berlinale Film Festival Documentary Prize. Other awards include the Chester Schirmer Fulbright Fellowship, UNESCO International Rostrum of Composers Award for my orchestral work ‘Empire States’, a Leverhulme Fellowship, a Sir Winston Churchill Fellowship, a Leverhulme Artist-in-Residence at MRC Laboratory of Molecular Biology, Cambridge, a PRS Women Make Music Award for ‘Reflected Glory’, a Major Individual Artist Award from the Arts Council of Northern Ireland and a PRS Composers’ Award in 2020. Her music has been recorded by Crash Ensemble and for a new film about genetics available on ‘constellations.world’

Her orchestral work was recorded for the lyric fm label ‘Irish Composers Series’ and her chamber music CD, ‘Island People’ was recorded for NMC. Richard Whitehouse in Gramophone wrote “the chamber domain seems ideally suited to her often inward and intimate manner of expression…it traverses a wide emotional range …a release that is cordially recommended to Gribbin admirers and newcomers alike.”

A Contemporary Music Network Tour of ‘Venus Blazing’ her violin concerto featured stage direction by Lou Stein and lighting by Bruce Springsteen’s designer Jeff Ravitz. The Guardian wrote that the composer is “A charismatic voice in new music”.

She is a graduate of Queen’s University, Belfast and Guildhall School of Music, London. She received her doctorate from the University of London.  She subsequently was a Visiting Arts Fellow at Trinity College, Cambridge.

Deirdre has always been interested in the juxtaposition of drama and concert music. Her second opera, ‘Crossing the Sea’, premiered at Wilton’s Music Hall in 2008. She has written extensively for radio, including music for BBC Drama productions of ‘Embers’ starring Patrick Stewart and ‘The Possessed’ starring Benedict Cumberbatch.  Her piece for solo cello, ‘Reflected Glory’ was a recipient of the PRS Woman in Music award and premiered at Huddersfield Contemporary Music Festival. She has written the score for the feature film ‘My Kingdom’ which starred Richard Harris and was nominated for a Screen International Award.

In 2019 her two new piano trios ‘After the Eagle and ‘Did you see and Angel Also?’ were premiered by the Amatis Trio for BBC Radio 3.  In 2020 ‘Grieving Eelphants’ was broadcast on Radio 3 by The BBC Singers as part of International Women’s Day She was featured at ‘Focus Festival’ New York, in New Zealand, Hong Kong, San Francisco and, with Patricia Rosario, in Mumbai. She has just finished 3 songs in the Irish language for The Irish Songbook Collection, which was published by The Contemporary Music Centre, Ireland. ‘Dark Matter Hunting’ was premiered by The Pacifica Quartet and will be performed by The Doric quartet in 2022. ‘Kindersang’ will be performed at New York’s Lincoln Center in 2022 and Centre Irlandais, Paris in 2023.

2015
Invitation to a Journey – a music theatre work about architect and designer Eileen Gray for Crash Ensemble, CoisCéim Dance and Fishamble Theatre Company

2012
Hearing Your Genes Evolve premiered at The Cutty Sark London

2012
The Binding of the Years – Piano Concerto BBC Symphony Orchestra

Currently serving on the ISCM British Section Board.

Deirdre was Artistic Director of the Society for the Promotion of New Music spnm from 2003-5 programming at Tate Liverpool and National Film Theatre.

First Composition Fellow at Trinity College of Music in September 2003.

From 2001-3 Deirdre was Fellow Commoner in Creative Arts at Trinity College, Cambridge.

Artistic Director of the Society for the Promotion of New Music for the 2003-5 Season.

Doctorate from University of London

2012
Leverhulme Artist in Residence at The MRC Laboratory of Molecular Biology Cambridge: To compose Hearing Your Genes Evolve, string quartet based on DNA